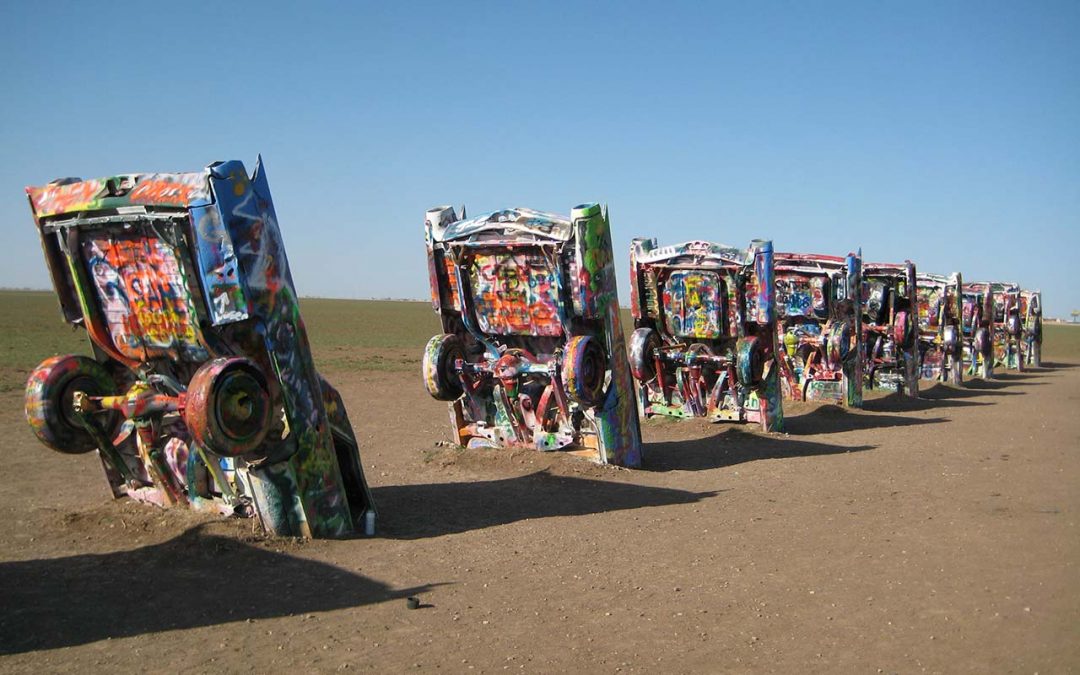 In case you’re wondering, and, despite the lead image above being a collection of scrap cars, it’s nothing to do with the Ace Car Breakers scrap yard. This is “Cadillac Ranch”, an art installation located in Amarillo, Texas, USA. It’s fair to say that we don’t see many American-built cars coming through our gates; especially vintage Cadillacs. Nevertheless, this eye-catch lineup of ten old ‘Caddys’ epitomises how scrap cars of any genre can actually be quite an attractive sight in the right setting 🙂

Who, why and when?

The ‘Ranch’ was originally put together back in 1974 by three guys (Chip Lord, Hudson Marquez and Doug Michels) who were a part of the art group that called themselves Ant Farm.

As you can see, the ten Cadillacs are buried nose-first in the ground and were manufactured between 1949 and 1963. The art installation commemorates the different models through that era, with a particular note on the evolution of their trademark tailfins.

Because both Chip and Doug were architects with an artistic slant (Hudson was actually an art student at the time), Ant Farm was founded as a means to get the attention of the somewhat corporate architectural community by showcasing alternative ways of combining art and architecture in a more imaginative way.

According to Hudson, “Chip and I were living in the mountains north of San Francisco, and there was a book meant for kids left in a bar near where we lived. It was called ‘The Look of Cars,’ and there was something on the rise and fall of the tail fin. I didn’t have a lot to do, so I just sorta drew it up. I’ve always loved the Cadillacs.”

Since buying ten Cadillacs and then finding somewhere to bury them wasn’t a viable option for the group, they decided to look for someone to fund the off-the-wall project. It’s claimed that they were given a list of eccentric millionaires to approach and eventually came across Stanley Marsh the 3rd, an American artist, businessman, philanthropist, and prankster from Amarillo, Texas.

After some deliberation, Marsh agreed to fund the Cadillac project and the cars were subsequently installed in a wheat field on land that Marsh owned. However, in 1997, all ten vehicles were moved by a local contractor a couple of miles to the west in a cow pasture. Shortly before Marsh’s death in 2014, ownership was transferred to a trust which (presumably) is still responsible for the site 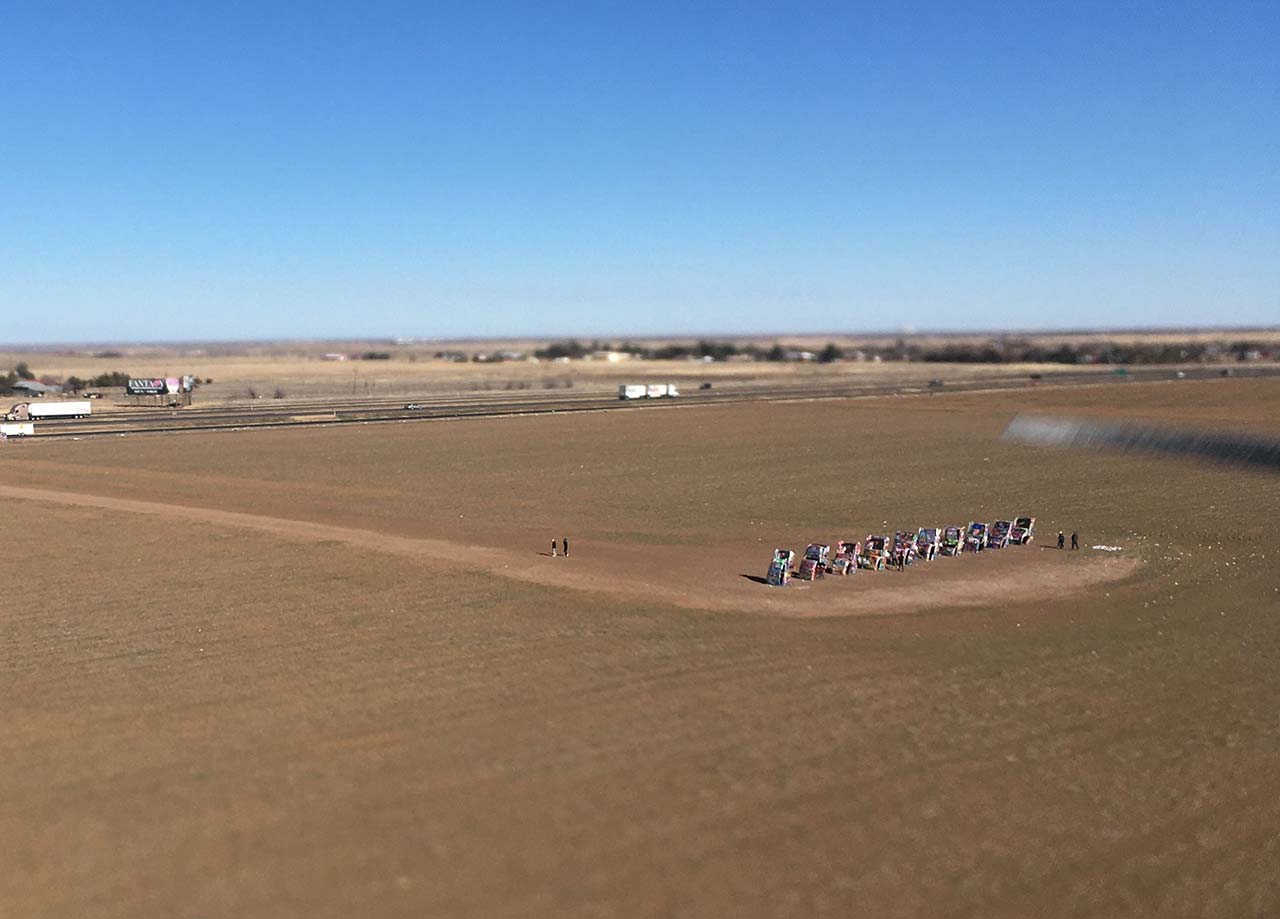 Cadillac Ranch is visible from a nearby highway and although it’s on private land, tourists and sightseers are free to get up close and personal by simply walking through an intentionally unlocked gate to see the cars in more detail.

Is the graffiti original?

No, and perhaps more surprisingly, spraying graffiti or painting the Cadillacs is actually encouraged for those who want to contribute their own style to the artwork. hence the intricate and colourful designs you see in the pictures.

Nevertheless, the cars are occasionally repainted in various colours, usually for a specific reason or to mark a particular event. For example, they were once painted pink to commemorate Marsh’s wife’s birthday and black to mark the passing of Ant Farm artist Doug Michels. 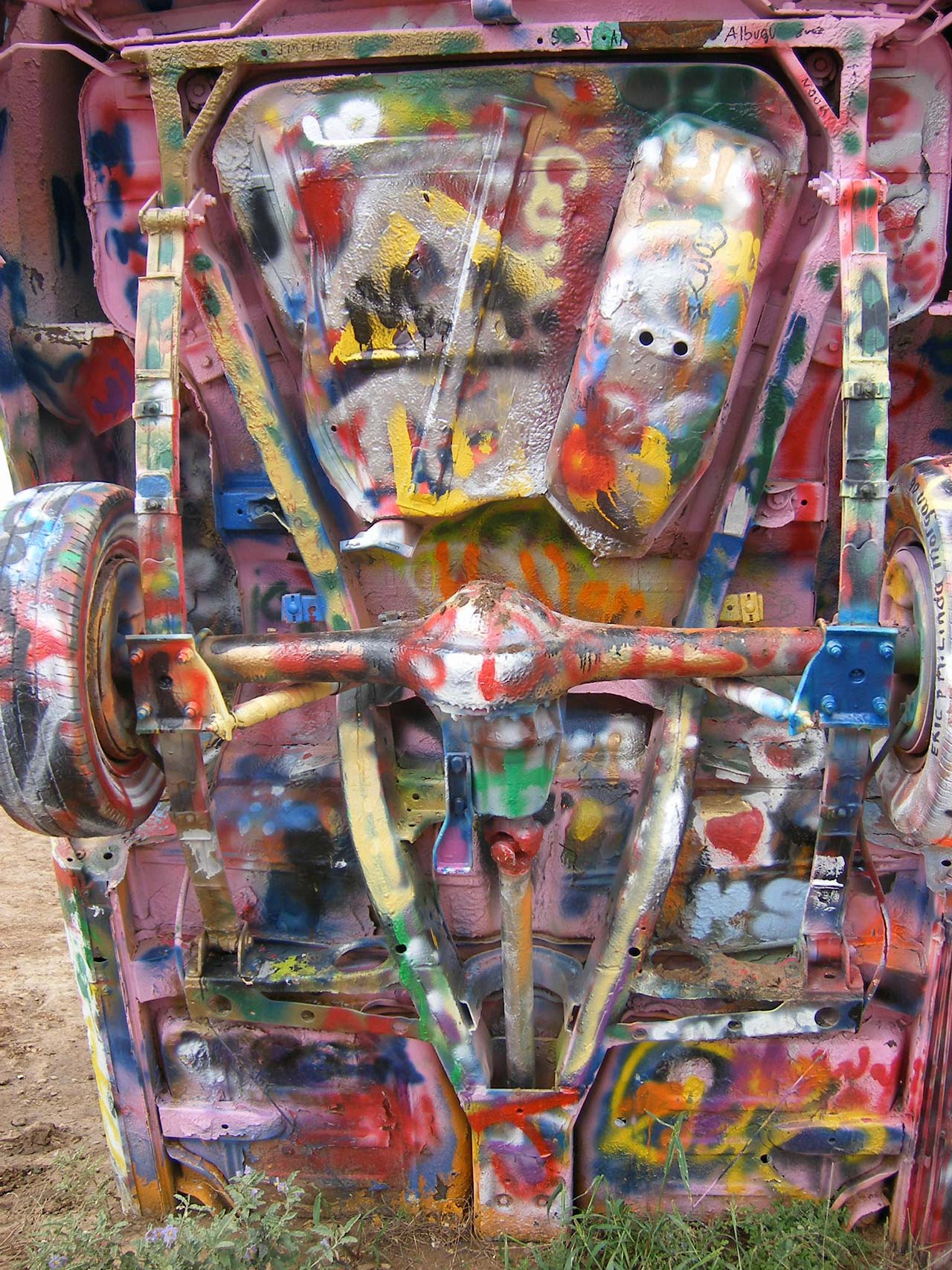 As you’d expect, this iconic landmark is no stranger to the entertainment world so here are a few notable references: