Scrap my plane – The aircraft boneyard 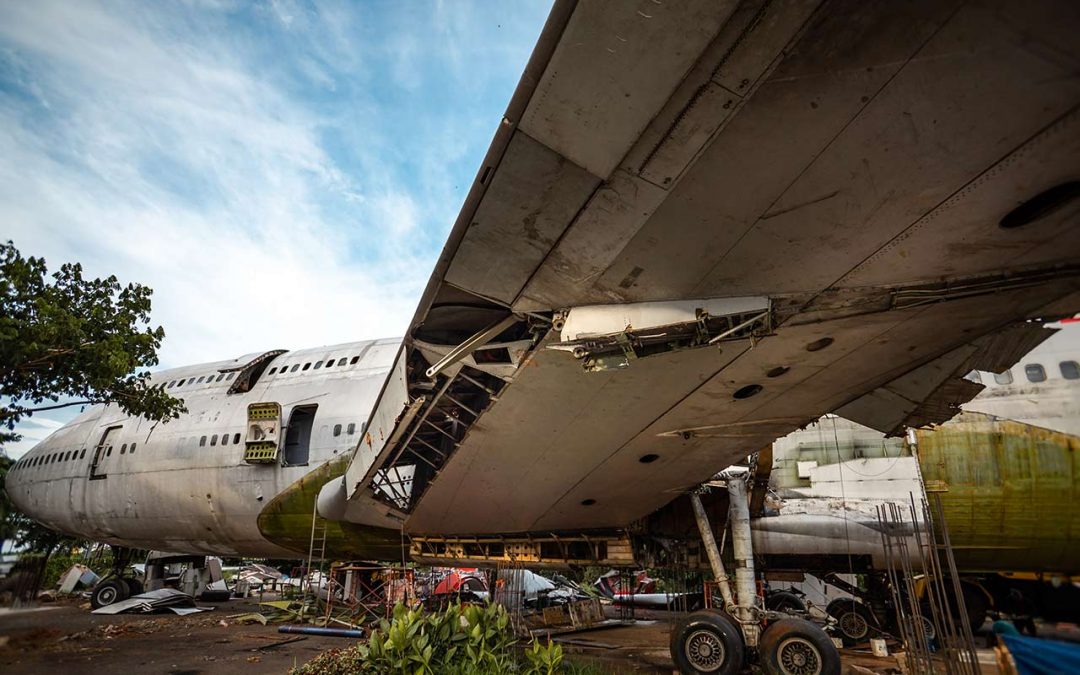 We don’t get many aircraft in our scrapyard – well, NONE to be precise. Nevertheless, we still thought it’d be interesting to take a look at what happens at an aviation scrapyard and how it differs from what we do on a daily basis.

Often called an aviation “boneyard” (or graveyard), it’s the place where aircraft are taken to once their natural service life comes to an end. Virtually all planes are retired from the skies eventually, perhaps with the exception of historic aircraft like the Spitfire or Lancaster Bomber for example. Regarding what happens next, as you’d expect, it’s remarkably similar to what we do. Although some of the aircraft are simply there to be kept in storage, the vast majority of them are kept for their spare parts and for the value of the metal they’re made of.

At our scrapyard, it doesn’t really matter if it rains or shines (it rains mainly!) but for an aviation scrap facility, it does. Most of them are located in very dry, arid regions such as deserts for mainly two reasons:

The king of the aviation boneyard 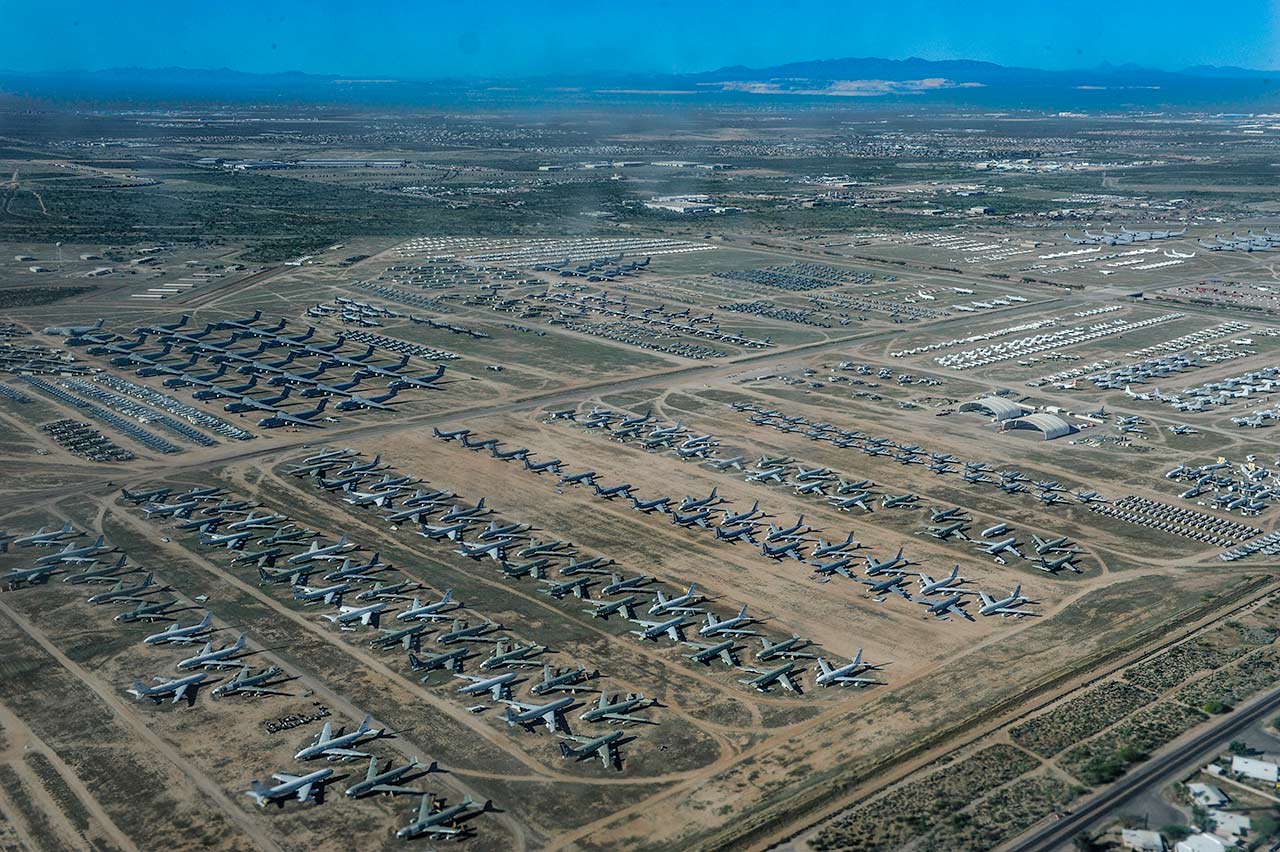 Perhaps the daddy of the scrap plane world is the 309th Aerospace Maintenance and Regeneration Group (309th AMARG) which is a United States Air Force aircraft and missile storage and maintenance facility in Tucson, Arizona located on Davis–Monthan Air Force Base. As you can see from the image, it contains A LOT of aircraft. In fact, it’s home to nearly 4,000 aircraft, which makes it the largest aircraft storage and preservation facility in the world.

Of course, commercial airliners need a final resting place too. Although the US has the largest number of domestic aircraft boneyards, they do exist in other parts of the world as well. For example, Alice Springs in the Northern Territory of Australia was the first large-scale aircraft boneyard to exist outside the United States. The facility was completed in 2013 with operations beginning in June of 2014. Once again, this is a very dry part of the world so its geographic location and terrain is ideal for the job.

The site is operated by Asia Pacific Aircraft Storage (APAS) Ltd. and caters to Asia-Pacific carriers as well as several other airlines from elsewhere around the globe. The facility can cope with the biggest of the big, including the colossal Airbus A380, the Boeing 747 and 777.

Are there any aeroplane boneyards in the UK?

Yes, there’s Cotswold Airport (formerly Kemble Airfield) in Gloucestershire which is Europe’s leading European aircraft decommissioning facility. There also was RAF Shawbury in Shropshire which started its salvage operations at the end of World War II but stoppped in 1972.

Do planes have a shelf life?

As a general rule of thumb, many planes can operate for up to 30 years before they need to be retired. As an example, a Boeing 747 is designed to cope with about 35,000 pressurization cycles. Flight hours are important too as metal fatigue is a crucial safety factor. Approximately 135,000 to 165,000 flight hours are the norm for this type of aircraft although 747s are generally retired a few years earlier at around 27 years of service. However, it differs depending on the type of aircraft. For example, a Lockheed Tri-Star has a shorter average lifespan of around 24 years.

Can I buy a plane from a boneyard and turn it into a home? 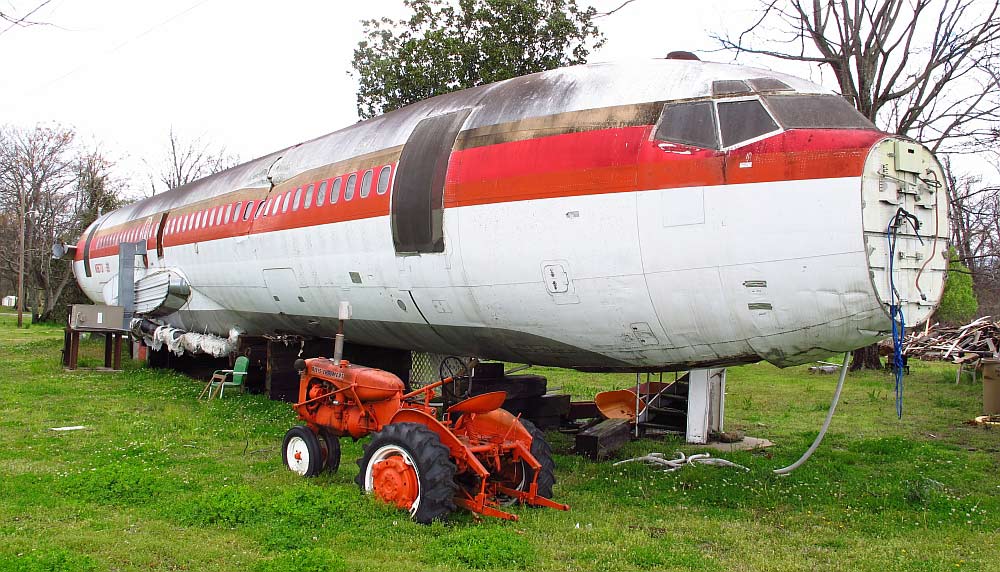 Technically, yes you can. And here’s an example of exactly that. As you can see from the picture, it actually looks quite cosy although could probably benefit from a lick of paint – Just make sure you remove the emergency escape slide first.

One of the main benefits (assuming you ever got planning permission) is that since jet airliners fly at high altitudes, they’re very well insulated so will retain heat very well in the colder months.

So there you have it, life certainly is different in the scrap plane world and as you’d expect, there are websites devoted to exactly this subject. If you’d like to explore the world of aviation scrapyards in more detail, a good source is www.airplaneboneyards.com.